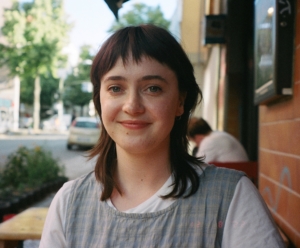 Lauren Laframboise is a PhD student at the Centre for Oral History and Digital Storytelling in the Department of History at Concordia University. Her PhD project is on deindustrialization in the apparel manufacturing industry in Montréal and New York City. In 2021, Lauren completed her MA thesis in History at Concordia, titled “Gendered labour, immigration, and deindustrialization in Montreal’s garment industry,” and from 2020-2022 she was the Associate Director of Deindustrialization and the Politics of Our Time (DéPOT). At Concordia, Lauren was also a research fellow on the Montreal 2050 Urban Futures project, and co-creator of a short oral history-based documentary film titled “Who gets left behind or left out? Stories of displacement and struggle in Montreal.” In early 2020, she was also a general coordinator for the Living Archives Vivantes online oral history platform, which hosts the stories of Rwandan exiles and survivors of the Rwandan Genocide living in Montreal. After completing her BA in History and International Development Studies at McGill University in 2017, she worked as the Research and Curatorial Coordinator at the Museum of Jewish Montreal, and coordinated the Museum’s yearly Research Fellowship program for students from 2017-201

The gendered pathways of decline: Lived Experiences of Deindustrialization in Montreal and New York’s garment industries

In the early 20th century, Montreal and New York City were the North American capitals of apparel manufacturing. The garment industry became emblematic of women’s increasing industrial employment throughout the 19th and 20th centuries, as well as a gateway for immigrant workers joining the two cities’ industrial workforces. At the same time, the garment industry was notorious for its poor and exploitative working conditions, where production often took place in sweatshops and in workers’ homes. Massive industrial accidents like the Triangle Shirtwaist Factory Fire in New York intensified struggles to unionize the industry in early 20th century, and the International Ladies Garment Workers Union (ILGWU) and the Amalgamated Clothing Workers of America (ACWA) made important gains for the industry’s workforces across North America. However, increased capital mobility, trade liberalization, globalization, and technological change prompted sweeping deindustrialization and massive layoffs in the North American apparel manufacturing sector in the 1970s to the 1990s. This slow process of decline not only led to job losses, but also to widespread de-unionization and an overall deterioration of the working conditions in the garment shops that remained. Through archival research and oral history interviews, my PhD project will explore the lived experiences of deindustrialization in Montreal and New York’s garment industries, employing a comparative approach to understand the gendered and racialized dynamics of industrial decline from the 1970s to the 1990s. With a focus on the experiences of immigrant workers, the project will explore the ways that international unions like the ILGWU and ACWA contended with deindustrialization, and how rank-and-file workers resisted closures both within and outside formal union structures.