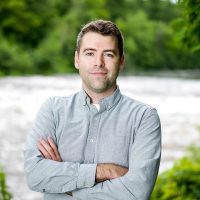 Peter Thompson is an associate professor in the School of Indigenous and Canadian Studies at Carleton University. He has published widely on representations of deindustrialization in the literature and popular culture of Atlantic Canada and Appalachia. In 2019, he published a book, Nights Below Foord Street: Literature and Popular Culture in Postindustrial Nova Scotia with McGill-Queen’s University Press.

Settler Memory and the Politics of Deindustrialization in Pictou, Nova Scotia

My current research examines the recently closed Northern Pulp paper mill in Pictou County, Nova Scotia. Through an examination of its physical appearance, plans for its future, and news stories, documentaries, and archival documents, I investigate how the mill interacts with the other memorials and heritage sites that make up the Pictou waterfront. In many ways, Northern Pulp is a symbol of the excesses of the Canadian settler state: the mill dumped effluent for decades directly into the territory and fishing grounds of Pictou Landing First Nation and survived only because of government bailouts. The fierce debate locally around closing the mill in 2020 revealed tensions between settlers and the Mi’kmaq community (who were treated as scapegoats for the mill’s closure) and caused cleavages between groups of workers (the lumber industry wished to keep the mill open while local fishers protested plans to dump effluent into the Northumberland Strait). The mill is a product of dispossession and environmental racism, but at the same time is also located in a wider cultural landscape in Pictou that touts the region as the “birthplace of New Scotland” and uncritically celebrates the town as a foothold of Canada’s settler culture. My project considers the mill itself as a monument to settler society and investigates how it interacts with the other memorials and heritage sites that make up the Pictou waterfront. In doing so, this project looks to make sense of the convergence of Canada’s settler colonial reckoning and the ongoing experience of deindustrialization in the space of a small town seemingly on the margins of Canada.

Women from the ex-coal mining town of Lota working on a collaborative arpillera urbana (textile art) depicting the history of their town. Photo by Magdalena Novoa.