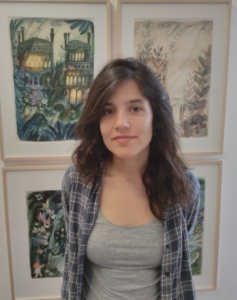 We are excited to welcome Gabriela Julio Medel to the DePOT team! Gabriela was selected as a postdoctoral student working in Italy working alongside Gilda Zazzara.

Dr Gabriela Julio Medel is a postdoctoral research fellow at Ca’ Foscari University of Venice (Italy). She holds a Sociology degree from Universidad Católica de Chile, a master’s degree in Labour Studies from Université Catholique de Louvain (Belgium), and has recently completed a PhD in Global Political Economy at the University of Bristol (UK).

Gabriela grew up in Chile, a country where sweeping neoliberal policies were implemented since the late 1970s and which has been often presented as a successful case of development and an example for the Global South and beyond. The inconsistency between this “success story” and the injustices and inequality experienced daily by the majority of the population contributed to shape her critical approach.

Gabriela’s research interests cover the topics of industrial relations, workers’ organisations and employment conditions, precarity, and workers’ resistances, among others. During her PhD, Gabriela studied how the dynamics of control and resistance appear in the workplaces of a country affected by an early and wide-ranging neoliberal transformation, focusing on workers’ experiences. Her research discussed the characteristics of the Chilean political economy and its evolution since the return of democracy in the country, to then present the current forms of workers’ resistance in the workplace. She recently joined DePOT to collaborate with the project “Lost in Transition? Il mutamento deindustriale a Sesto San Giovanni e Porto Marghera” led by Professor Gilda Zazzara, concerning the transformations engendered by the deindustrialisation of two industrial districts in Northern Italy.