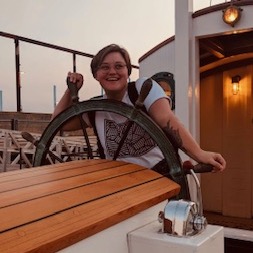 Amanda Marie was born and raised in Washington State, and has lived all over the United States – most recently in Brooklyn, New York.  A third-generation bartender and first-generation college student, their graduate work focuses on the implications and relationships that develop through tipped work and the ways that tipped labour exists on the border of the formal and informal economies. After a strange, varied, and mostly interesting career in both the coffee and spirits industries, they decided to return to school and recently graduated with a bachelor’s in history from Hunter College in New York City where their studies were mainly focused on the history of the Americas in the 19th and 20th century.  Their department named them the Paula Kaplowitz Enns memorial scholarship recipient for exceptional undergraduate student.

Tipped restaurant positions have been a largely female dominant workforce in the United States since the turn of the century, especially in smaller towns and cities where they were often immune to anti-barmaid ordinances that existed within the larger cities. These positions were often occupied by working-class women whose spouses, fathers, and siblings were engaged in industrial labour, while their own share of the family’s income was earned through maintaining relationships within their community. This project seeks to understand how women in tipped restaurant work in deindustrializing areas have experienced these shifts, as their clientele transitioned from a declining industrial workforce to residents engaged in other types of work, especially in areas that have experienced significant gentrification.  How do these women negotiate changing workplace expectations, and shifting definitions of aesthetic labour within the restaurant space? How do women in tipped restaurant work negotiate the shift from supplemental income earner to breadwinner within their family unit?