Honouring the Original Derry Girls: the Resurgence of the Commemoration and Celebration of Shirt Making in Derry, Northern Ireland 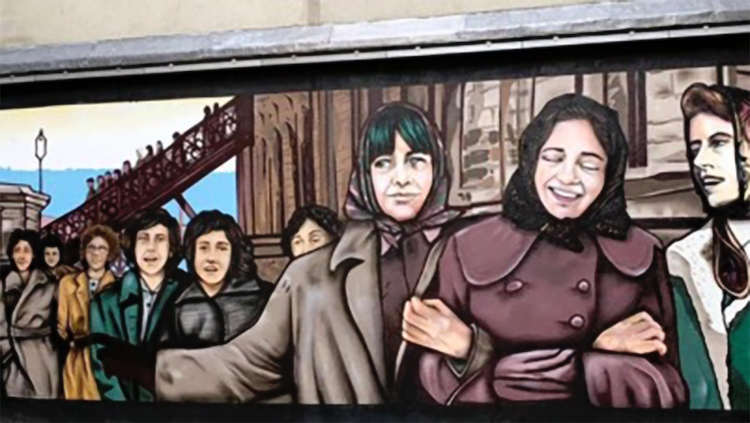 The city of Derry in Northern Ireland has a long and illustrious history of shirt making. To this day, most Derry natives have some form of connection to the shirt factories, whether they worked in them directly or had family members who worked in them. The industry had humble beginnings however, with the wife and daughters of businessman William Scott creating the first hand-sewn shirts in 1831. As demand grew and garment-making techniques and technology improved, the first large-scale shirt-making factory opened its doors in 1857. The five-storey, 19,000 square feet Tillie & Henderson’s factory marked the birth of the industrial scale, shirt-making industry in the city which, through time became the economic lifeblood of Derry. At its height in the 1920s, the shirt-making industry employed 18,000 people, most of whom were women. Yet, the unpredictable nature of the industry, where demand for products ebbed and flowed coupled with increased foreign competition resulted in a steep decline in employment levels. As economic conditions in the city worsened, male unemployment rose and dependence on female wages increased dramatically. This left many families dependent on what was becoming increasingly precarious employment. By 1951, just 6,028 people were employed in the industry of which 5,515 were female [1]. Employment levels continued to fall, with only 1,249 by 1971 out of a work age population of 34,362 [2]. By 1998, the City Factory closed its doors marking the closure of the last industrial-sized shirt factory in Derry. 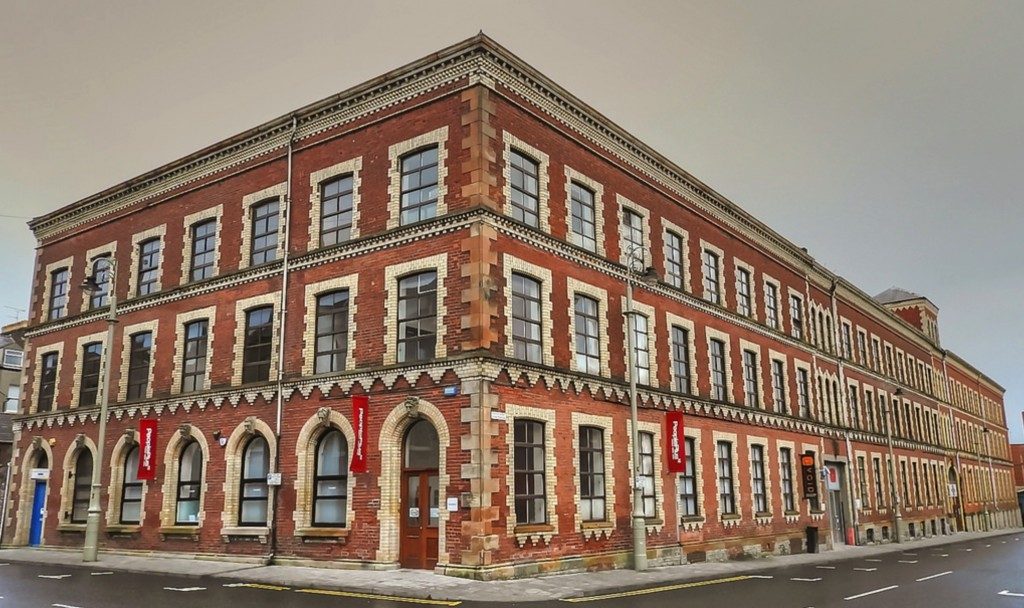 Despite its demise, the shirt making industry left a significant cultural and architectural legacy in the city and surrounding areas. The mostly female workforce of the shirt factories gained a legendary reputation for keeping the economy going even in the darkest days of the Troubles of Northern Ireland. The emotional connection between the former shirt factory workers and their shirt-making careers was enduring. Nostalgic storytelling amongst friends and families of the factory days continued, mostly in private settings without much local media attention. Although they had moved on from the factory, the workers attempted to maintain a connection with their factory friends even organising sporadic events such as dinner dances. Many of the former shirt factory buildings continued to dominate the skyline in and around the city centre. Some were bought by developers and repurposed for the changing economy and cityscape. Offices, shops, educational hubs and housing replaced the industrial enterprises that once occupied these spaces. Yet those factories that were on the outskirts of the city did not have such a bright future. Many were left derelict for decades, often attracting anti-social behaviour leading to further decay or demolition. This included the building that started it all, Tillie and Henderson’s which succumbed to fire and had to be demolished in 2004 much to the disgust of many shirt factory workers and Derry natives. For them, the loss of these former factory buildings represented a failure by city planners and developers to safeguard the legacy of the industry. 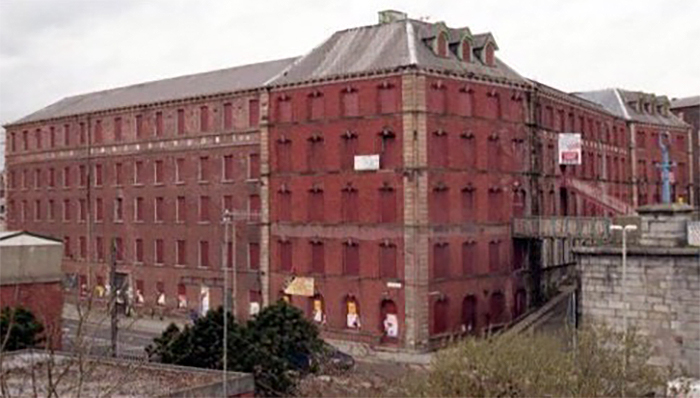 The anger surrounding the demolition of the iconic Tillie & Henderson’s factory building acted as a catalyst for a community-led campaign to memorialise the shirt making industry of the city. In particular, the campaign focused on the “Factory Girls” in recognition of the women whose economic contribution to their families and the local economy at large was so vital throughout the mid to late-20th century. Plans for a commemorative sculpture were created and put to the local council’s development committee in 2005. After numerous false starts, funding was secured, and artist Louise Walsh began the process of creating the ambitious and symbolic sculpture in 2006. Planning delays frustrated progress, and with these delays came increases in building and material costs. Frustrations boiled over in 2010 when Derry won the bid to become the inaugural UK City of Culture in 2013 as it became clear that any sculpture would not be completed by the time the celebrations began. The community-led campaigning gained momentum with local trade unions and politicians joining the calls for a memorial to the workers. Despite numerous high-profile demonstrations in the city and continued lobbying of the Northern Irish government and local government, the council scrapped plans for Walsh’s artwork in 2018, citing funding issues. A different, smaller-scale sculpture was promised almost immediately following scathing backlash from campaigners and the public, but it is yet to materialise. Mistrust of local government angered and disheartened campaigners in equal measure. It also represented a failure by authorities to commemorate the industry in a meaningful way. 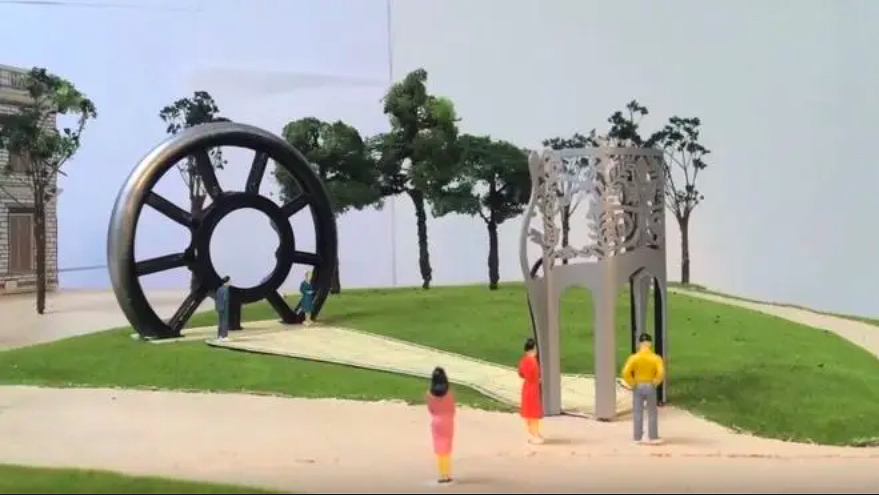 Frustration at local government led to a number of community-led initiatives being planned and developed to commemorate the workers of the shirt factories of Derry. Works of public history began to emerge in the city, with commemorative murals being unveiled in the Craft Village in the city centre by the Inner City Trust in August 2019. In November 2019, public pressure helped ensured that ‘A Stitch in Time’, a light installation gifted to the city during its year as the UK City of Culture was saved from being removed and discarded by the local council. Renewed momentum for the memorialisation of the shirt factory industry then came in February 2020, with a series of events designed around the Herstory Project. The festival, aimed to draw awareness to local women’s history and was organised by the city council. It’s programme featured a number of social events recognising the women of the shirt-making industry throughout the history of the city. Factory Girls were invited to take part in reminiscing and singing sessions as well as participating in interviews designed to capture some of their experiences from their factory days. By attending some of these events with my grandmother, (a former shirt factory worker) the festival allowed me to further explore my family ties to the industry and ultimately inspired my PhD project. Also, through these events, those who campaigned over many years, reconnected with a number of their former colleagues. The campaign for a permanent memorial for the Factory Girls was reignited with a determination that this time, they could not take no for an answer. 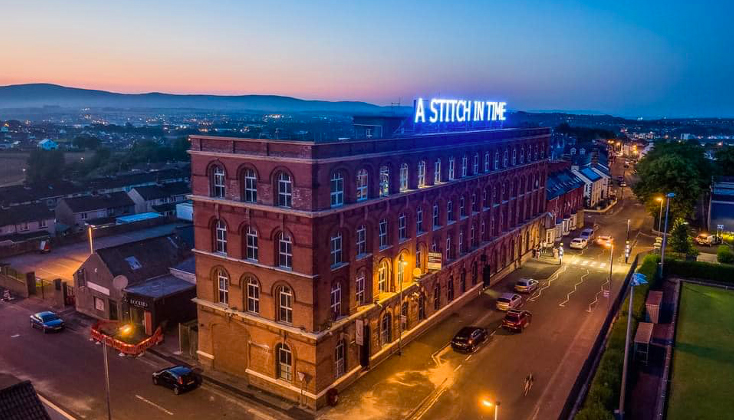 It was with this renewed momentum, that the ‘Friends of the Factory’ initiative was born. Comprised of former factory workers as well as relatives of those who worked in the shirt factories, the group was created as a means of establishing a celebratory community whilst also campaigning for permanent recognition of the city’s shirt-making heritage. With the onset of the Covid-19 pandemic, the initiative was forced to restrict campaigning to online only. However, despite the restrictions a flourishing community was successfully developed, initially through Facebook. The attention of the group then switched to creating a tangible and meaningful memorial to the factory workers of the city, independent from the now stalled council-led memorial. A plaque initiative was created in conjunction with the Derry Trade Unions Council in honour of the celebration of workers on May Day. The initiative ensured that commemorative plaques were installed on six of the remaining shirt factory buildings throughout the city with plans for more in the near future. Unveiled over the course of 3 days, the plaques serve as a permanent reminder that the current cityscape of Derry has been moulded from an industry that was once the lifeblood of the local economy. They also serve as a reminder that community-led public history can fill the emotional and symbolic void left by a failure of local authorities to commemorate an aspect of the past effectively. 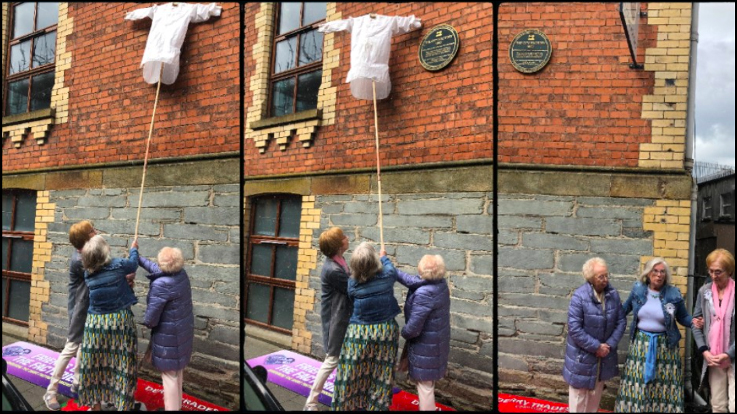 With public support at an all-time high, the efforts of the campaigning factory workers and their supporters have not gone un-noticed by the local authorities and local business alike. Shirt factory themed business ventures have sprung up throughout the city in recognition of the industry’s legacy. Commercial interests now range from commemorative pins and guided tours of former factory sites to cafés, a restaurant and even a cocktail bar. This year has also seen the first large-scale temporary exhibition dedicated to the shirt factories housed in the city’s Tower Museum which is run by the local council. In addition, the local council have once again agreed to commission a sculpture to commemorate the legacy of the shirt-making industry. After many years of frustrated campaigning and a resurgence in community-led commemoration and celebration in the city, I really hope that those who worked in the shirt factories get to see this rightfully deserved homage to an industry that left such an enduring mark on the city I call home.