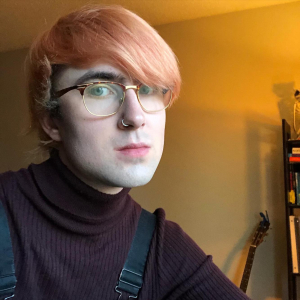 Liam Devitt (they/them) is a writer, activist, and graduate student based in Tiohtiá:ke/Montreal. They are in the first year of their MA in History at Concordia University, studying histories of queer youth amidst deindustrialization in Cape Breton, Nova Scotia. They received a DePOT Masters’ Fellowship and a SSHRC Canada Graduate Scholarship-Masters to undertake this work. Broadly, their research interests lie at the intersections of the histories of sexuality, deindustrialization, youth, and (neo)liberalism.

Liam holds a BA (Hons.) in History from the University of Lethbridge, where their undergraduate thesis examined the Toronto queer left during the neoliberal turn. They have worked as a research and curatorial assistant on the exhibit “InQueeries: 2SLGBTQ+ Histories of Southwestern Alberta” at the Galt Museum and Archives in Lethbridge, Alberta, and as a research assistant for Dr. Kristine Alexander for her work on the Model United Nations movement in Canada. Liam constantly reminds everyone that it is not just bread we fight for, but we fight for roses too.

My MA research will ask how queer people who grew up in Cape Breton, Nova Scotia remember their youth and their transitions to adulthood amidst the collapse of the island’s once dominant steel industry from the late 1960s to the 1990s. Deindustrialization is an incredibly transformative process. My research examines how deindustrialization affects queer sexualities and communities.The project looks at queer Cape Bretoners who came into adulthood during this period of intense economic and social change. It asks: how did coming of age in deindustrializing Atlantic Canada shape queer people’s experiences and life stories at the end of the twentieth century? Was Cape Breton (a regional centre far from big cities like Montreal and Toronto) hostile to queer life, and/or was it a place where queer resistance and community could flourish? This research will be based on oral history interviews with queer Cape Bretoners who came of age during this period of deindustrialization.