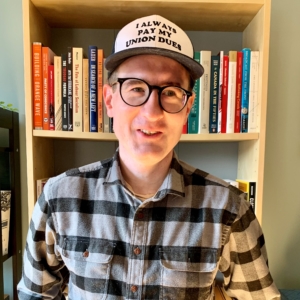 William Gillies is a History MA student and recipient of the 2022 DePOT Masters’ Fellowship at Concordia University. He grew up on Cape Breton Island as it deindustrialized and moved to Calgary to find work, holding jobs in cartography and later political organizing. William is a founding member, researcher, and writer for the award-winning Alberta Advantage podcast which produces episodes on current political events and working-class history. He recently returned and completed his undergraduate degree in history at the University of Calgary. William’s primary historical research interests are labour, regional economic development, fossil-fuel capitalism, and state industrial policy.

My MA history thesis will examine the Cape Breton Development Corporation (Devco) as an example of energy transition and regional deindustrialization, with an emphasis on the relationship of workers to the Canadian state in the context of public ownership of a declining energy resource. Created in 1967 by the federal government, Devco took over the collieries of Cape Breton Island in a bid to avert regional economic collapse. Devco was to gradually wind-down coal mining, and foster alternative economic development, but ended up operating the mines until they closed in 2001. Deindustrialization is often studied as a failure to economically diversify away from industrial employment, but rarely through the lens of energy transition, such as the shift from coal to oil after 1945. The importance of energy to the economy and the particular labour relations of its production made governments susceptible to worker pressure to save their industry. Devco fits into an international pattern of post-war state ownership of the coal sector such as Britain’s National Coal Board. Domestically, Devco connected with a new interventionist state that directed regional economic development. The 1973 oil crisis encouraged the federal government to revisit the strategic value of cheap coal, and expand rather than wind-down Devco’s coal mines. However, federal energy and regional development policy was contradictory, as the state intervened in other provinces to support the hydroelectric, nuclear, and oil sectors which competed with Cape Breton coal. Even some proposed local alternatives to coal mine employment were wrapped in the logic of energy transitions, ranging from off-shore oil exploration to heavy water plants for supplying nuclear power stations. Much historical research on deindustrialization in Canada and its working-class impacts has focused on the private sector, but Devco’s unique history shows the interplay of state ownership and worker responses to closure. My work asks how Devco fits into histories of energy transitions? How did Cape Breton miners and their communities interact with the state and its regional development plans? Why did successive federal governments operate unprofitable coal mines for over thirty years?