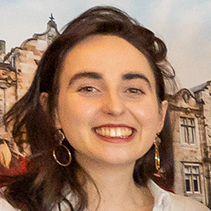 Amber Ward is an AHRC-funded PhD student in the Department of History at the University of St Andrews, Fife, Scotland. She is jointly supervised by Dr Malcolm Petrie (University of St Andrews), Prof Jim Phillips (University of Glasgow) and Dr Ewan Gibbs (University of Glasgow). Her work investigates community, identity and consciousness in Fife’s ex-mining communities in the aftermath of the miners’ strike of 1984/5. Her research examines the cultural resonances of economic change, and pays particular attention to the experiences of ethnic, racial and LGBT+ communities.

Amber completed an undergraduate degree in Modern History at the University of St Andrews in 2018, and a masters’ degree in the same subject in 2019, also at St Andrews. In 2019 she worked as a project coordinator with Journeys in Design, where she facilitated a series of interactive exhibitions which pivoted around industrial memories and storytelling. From 2019-2020 she worked as researcher with Fife Employment Access Trust, where she investigated the long-historical transformation of a mill estate into a public park and community regeneration space. Drawing upon the oral histories and archival research from this project, Amber wrote a popular history publication, Silverburn Through the Ages, which was published locally in 2021.

Investigating Community, Identity and Economic Change in the Ex-Mining Communities of Central Fife after 1985

Amber’s thesis investigates how economic changes are felt, manifested and rationalised by individuals across different communities and demographics within ex-mining localities. Focussing on the ex-mining communities of central Fife, Scotland, Amber’s study uses oral history to enquire into different perceptions of the changes brought about by the concentrated coalfield deindustrialization of the 1980s and 1990s, and the place of these changes within individual and collective memory.

In 2020, the Scottish Index of Multiple Deprivation ranked an area of central Fife as the most deprived ex-mining locality in Scotland, and the fifth most deprived in Scotland overall. In the UK, such areas are often branded as ‘left behind’ localities. However, in considering various perceptions of community, identity and change, this study hopes to move beyond such one-dimensional, hollow and prescriptive narratives.

Further, by inviting local community groups and initiatives to share their memories of recent social change, the project also attempts to consider the impact of deindustrialization beyond contexts of labour and production. By extension, this project attempts to shift the scope of deindustrialization studies beyond that of the ‘traditional’, much-mythologized, ‘white working class.’